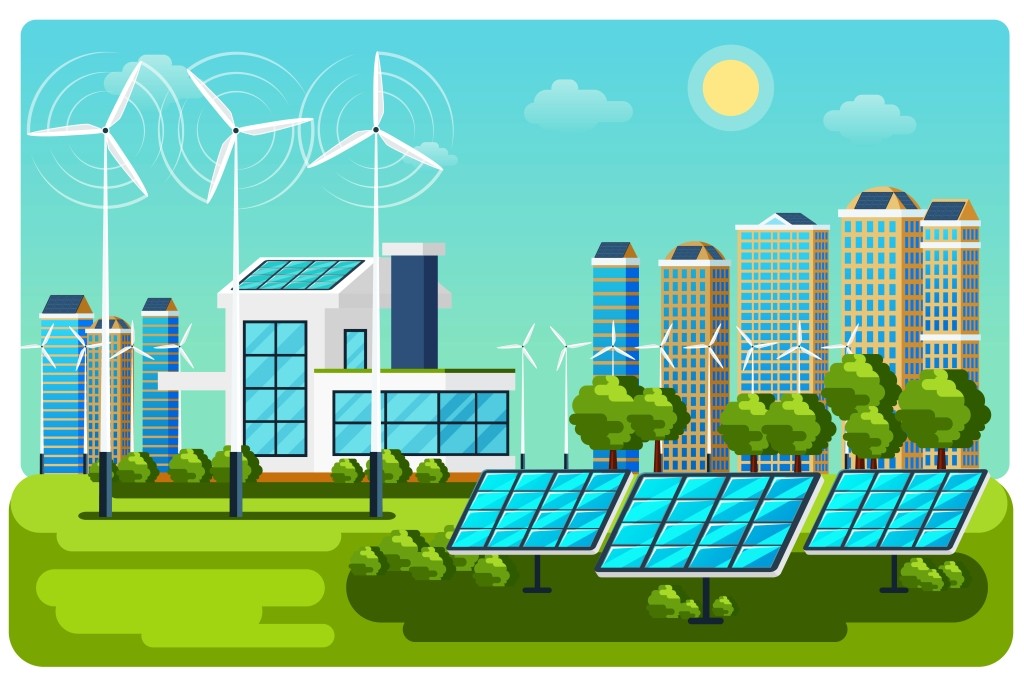 Green buildings don’t have to be beige, uninspired monolithic creations. Saving the planet from harmful greenhouse gases, deforestation and dirty energy is a cool mission. And green buildings help get that done in style.

Green buildings are designed to limit their impact on the environment. This is accomplished through better planning during the design phase. And for existing buildings, upgrades can be completed to help reduce energy consumption and provide landscaping that works in harmony with the property’s surroundings.

And what makes a green building cool? It needs to be trendy, not clunky. There’s an architectural benefit to the property that both helps it stand out and improves the value of its surrounding community while respecting the environment.

In the United States, green buildings are assessed using standard set out by Leadership in Energy and Environmental Design (LEED).

This is one of the most beautiful green buildings in existence – partially because it shines a light on green construction so effectively. The structure was constructed from responsibly sourced wood, and does an incredible job of leveraging natural light to better illuminate its worship area.

One of the most distinctive structures in Oakland, California, they offer guided tours of their cathedral to visitors during the week. While it’s a religious facility, tour guides point out different environmentally responsible aspects of the design.

And what better way to celebrate mother nature than bask in sunlight and enjoy the view of a beautiful blue sky, contrasted with beams of responsibly sourced wood?

In 2013, construction was completed on One Angel Square. This facility provides space for 3,000 people to work and collaborate. It serves as the headquarters of The Co-Operative Group. This organization operates a wide variety of businesses in the UK on behalf of its customers/owners.

The Building Research Establishment Environmental Assessment Methodology (BREEAM) is an international organization that rates buildings for their environmental sustainability. This particular structure received an “Outstanding” rating (the highest rating possible) with a final score of 95.16% thanks to their efforts to create a green building that could house their headquarters.

The design of the building placed the carpark beneath the building, and opened up the building with an atrium that provides a striking visual contrast with the other structures in the area. The flowing glass allows in plenty of sunlight and warmth during Manchester’s frigid winters. And advanced, energy-efficient power systems keep the building completely carbon-neutral. 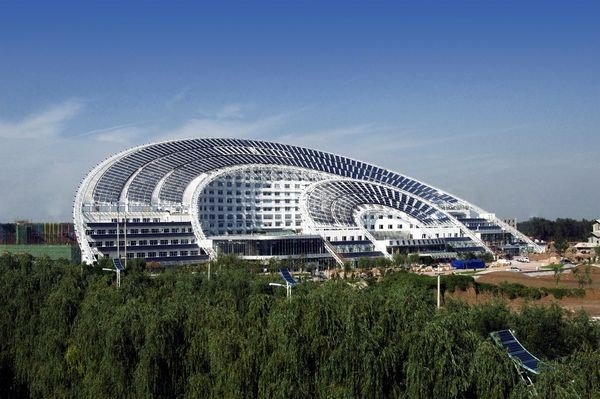 China struggles with massive air pollution challenges in their large cities. But there’s a jewel of green construction tucked away in the forests of Dezhou. The Sun-Moon Mansion is a multi-purpose facility that features solar paneling across its entire façade.

Throughout its design phases, the facility was meant to serve as the largest solar power plant in the world. It does a beautiful job of blending functionality with clean energy sources.

We’ve looked at two green building so far. But what about an entire city? Masdar City is wrapping up construction. The entire community is designed from the ground-up to be carbon neutral. It’s a noble goal. But, did it go too far?

So far, there are only a few hundred residents. And it appears the goal may have been too aggressive for today’s realities. Current reporting indicates that the city will only be 50% carbon neutral. While it falls short of its goal, we should applaud the designer’s efforts and the strong political will required to launch a green project in one of the largest oil empires in the world.

Coming back to the United States, we’re looking at a structure at the Phipps Conservatory and Botanical Gardens. While the lush design of the botanical gardens is hard to ignore, there are some really innovative green buildings beyond the walls of the conservatory.

The first thing you notice is that the office building blends in with the surroundings. If it weren’t for the squared angles, your eyes might not recognize it as a workplace. The use of responsibly sourced wood softens the visual impact. This LEED certified building is one of the most environmentally sustainable facilities in the US.

While its design and construction might not be the most economically feasible for broad adaptation, the building serves as a model for cities of the future.

New technology is meeting old bones at King Street Station. This active Amtrak station dates back to 1906. It’s an iconic part of Seattle’s skyline. And it recently went through a massive renovation to provide for more traffic capacity and bring both the design and power systems up to 21st century standards.

Here’s the shocking part. While the size of the station has quadrupled, it’s energy consumption has plummeted by 68%. I think my favorite part of this green construction project is that they brought back much of the original materials – pieces of the building that had been moved off-site for preservation has been reconnected with this iconic space.

The Chesapeake Bay Foundation is dedicated to educating people that live in and around the watershed of the Chesapeake Bay about how human activity impacts our waters. They’re able to drive home this message by taking locals on tours of their environment.

And what better way to get the conversation rolling than hold meetings in a LEED certified building? This green building is constructed using reclaimed wood. And its raised construction is a forward-thinking aspect that will be well-suited to compensate for potential rises in sea level, or tidal events. The official name of this building is the Brock Environmental Center.

In conclusion, I hope you’ve enjoyed our collection of epic green buildings. It’s important to celebrate environmentally sustainable with eye-catching design. By using responsibly sourced materials, designing for reduced energy consumption and bathing occupants in natural light, we can do our part to thrive as a species, alongside mother nature.